To Mimic or Not to Mimic

So now that we are all clear on telling the difference between the wonderpus and the mimic octopus, I’d like to delve further into the realm of the mimic.

There are actually three species in the mimic family: the mimic, the brown mimic and the white-v octopus. The latter two look very alike and don’t put on much of a show, so it is the mimic that grabs most of the attention. All three species have white dots going down the length of each arm as well as a white v-shaped marking on the body towards the rear.

The behavioral trait that has brought the mimic octopus so much attention is the ability to copycat other marine creatures. I don’t dispute that they do this, but in my opinion, this attention is overblown. All octopus species can change their colour and shape in incredible ways and many, if not most, species mimic other creatures as a means of defense. 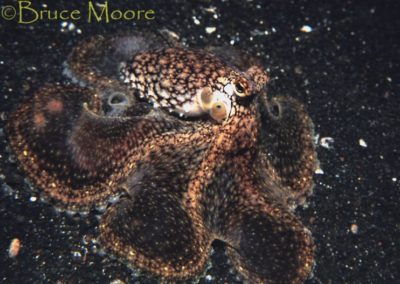 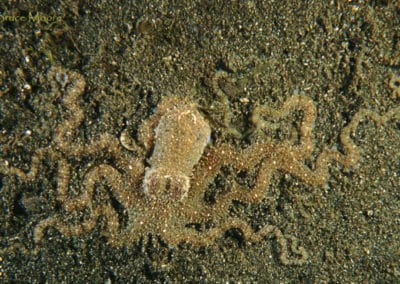 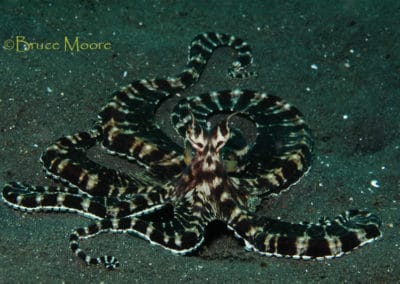 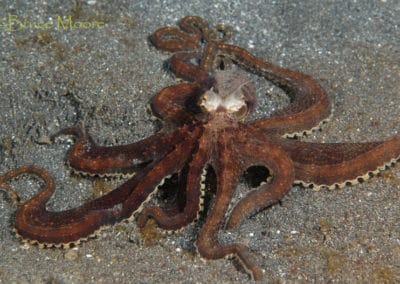 Above is a brown mimic, a white-v (also called long-arm octopus), and then the last two shots are of a mimic showing different hues.

The best episode of mimicry I have witnessed by an octopus was actually done by a coconut octopus, copying a hermit crab, complete with the shell entrance being off-centre and the shell being larger at one end. It certainly fooled me until I got too close and the octo realized that his “walking on tip-toes hermit crab” impression wasn’t working, so it abandoned the valiant and memorable effort, “breaking character” and instantly reverting to being a coconut octopus sitting on the substrate in a lump. I had been fooled, but was simply swimming in that direction, otherwise I would never have thought otherwise. I recounted the experience to Crissy Huffard, a friend who is an octopus researcher from Berkeley and she one-upped me, reporting seeing an octopus in Fiji doing the same, but adding stripes on the legs to enhance the disguise. So perhaps the mimic just has a better press agent than his bretheren.

Personally, I feel that a wonderpus puts on a better show than a mimic as they are usually less shy. But the mimic does copy specific creatures more clearly. I have seen a mimic, all alone and not under any attention or threat, sit atop a sand mound with the outer half of each arm pointed to the surface, possibly copying a sand anemone. A sea snake impression is more obvious and understandable. Bobbing a head from a hole like a mantis shrimp along with looking like a small cuttlefish, or “being” a jellyfish up in the water column are other obvious impressions. It is natural for many creatures under threat to puff themselves up and splay their arms in order to appear larger than they are. 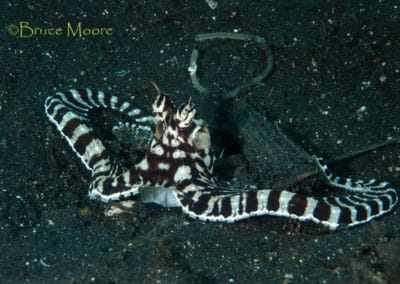 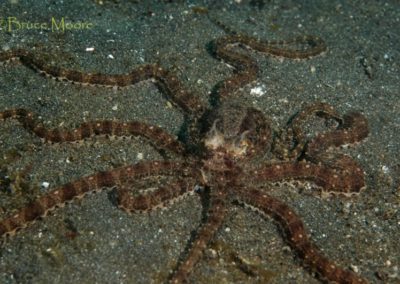 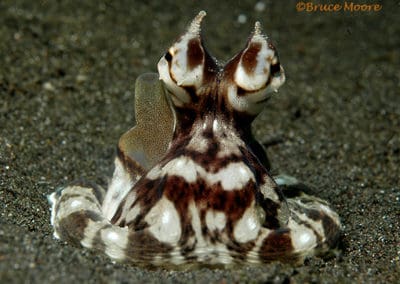 For this reason, the supposed lionfish impression is one I take with a grain of salt because it is simply far too big to be confused with a lionfish, but that is just my opinion. The popular flatfish impression is one I feel is simply hydrodynamics – the fastest way across the bottom while conserving the most valuable energy. Flounders often attack octos and often tag along with them in order to try and steal a meal from them. I don’t see the benefit in looking like one. All sand octopus “fly” in the same manner over the substrate if threatened or in a hurry. That is how I feel, but I’ve seen mimics do very strange things that I can’t explain, so much remains in the eye of the beholder.